where is my copy of Dirk Gently's Holistic Detective Agency?

This evening I went to my first Business Gateway course... the 3rd course (financial planning) of a 3 part series on planning to start a small business. Yeah. Pretty much exactly like realising - three months after you bought the VCR - that you're not entirely sure you're setting the timer right, and then picking up the instruction manual you'd tossed to one side when you got home from Comet and excitedly plugged the thing and started pressing buttons... *shrugs* it's how I work in every other aspect of my life after all.

Anyway, it turns out that (mostly thanks to having had a very helpful chat with my brother the night before) I already pretty much knew everything they were telling us... Felt good to be in a room full of people thinking about starting a business* knowing I'd already done that... and it's working. So far. I'll not be going to parts 1 & 2 of the course I don't think, but I am going to sign up for a couple of HMRC's tax seminars... the prospect of which fills me with exactly as much joy as you'd expect! Thing is though, this reassurance that, yes, I am doing it right, is worth the time spent... besides I figure now I've picked the manual up I might as well flip through the pages covering anything which I'm not sure of, after all I might find that there's a function on my metaphorical VCR I didn't know about.

After "school" I came home and went back to work. Partly because spending two hours thinking in detail about cashflow and profit/loss forecasting, focusses the mind somewhat on the need to build one's business**, partly because I've been a bit lax this week and felt like catching up, but mostly because I'm really enjoying what I'm doing just now. That's a very good feeling.

* lots of "hello my name is X and I've lots of ideas but haven't settled on one in particular yet" type introductions from my classmates
** a nice euphemism for "do more work" in my case.
Comments

I've been enjoying revisiting some old TV I'd forgotten, courtesy of the net... amongst it Russell T. Davies' excellent Queer as Folk thank you 4OD :)

Something said in the opening episode has kind of stuck with me and rattled around in my metaphor centre for a while. 's a bit... blue*, and I'm unsure if I'll post this but I feel like writing it down all the same.

The opening episode of QaF was well publicised at the time for containing a gay sex scene in the opening 10-15 minutes, Stuart (the anti-hero) is fucking Nathan (the über-twink) and it's visceral, passionate, and totally without feeling. Looking at it now I can see what I think Davies was getting at with this scene: I mean I knew all along that it sets up the character dynamic for the rest of the show. But that contrast: the passion and the lack of emotion. That's key.

Later Nathan's describing this encounter (from his perspective) to his friend (who is in all fairness a thin narrative device which Davies acknowledges when he drops her from later scripts...) and he describes how he can still feel Stuart inside. As if he's left a space... Nathan (15) thinks he's in love because it's been such an overwhelming experience. He's not of course. He doesn't know yet what love is**, but he has been powerfully affected...

... and I'm watching this through new eyes, over a decade later. I'm remembering how I felt the first time***, and I'm also transposing that sensation onto later, more developed, more complex feelings.

One of the things you learn in art classes is that we human beings relate best to the shape of a thing through an apprehension of the spaces around it. That we best know a shape by the space it makes. Somehow that and this resonate for me at the moment.

* in both senses! I didn't post this for a couple of months but I think now that I will. It won't appear "front and centre" where it might upset or offend, but it will be here when I (or anyone else) look back, and I think it should be.

** My reading. But then perhaps I don't know what love is either.

tell me that you want the kinda things...

Light attendance: only three of our team (named: "fizzy communion" this week) and only five other teams... but we won. Again. Good feeling.

The shift from Friday Gang to pub quiz team has been a gradual and strange one... it'd be good to get back some of the old Friday-ness, but I really enjoy the quiz team, Spending monday evenings both exercising and killing brain cells has a pleasing symmetry

Recording the end of an era.

I realise to most normal people this: 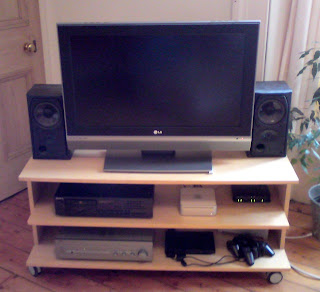 ...probably looks like quite a busy home entertainment set up. To me it's strangely sparse looking. After ten years' faithful service (and mostly because of stupid politicking between Sky and Virgin) I've reluctantly retired my much loved TiVo following their (stupid) discontinuation of the UK program guide service for the venerable Series 1 PVR10UK on June 1st this year.

It feels weird to watch TV without hearing that old familiar plwing! now and then. However a DVR without an EPG is as much use as a chocolate tea pot, and while there are some stalwart users continuing with a homebrew effort, I'm throwing in the towel on the dear old gargantuan silver box and moving on to newer and better things... like Plex which seems to fill pretty much all the gaps left by TiVo, but via a different route.

I'll probably add broadcast TV with one of these clever widgets if/when I can afford to buy myself new toys, but in the meantime my modest viewing needs are more than catered for in a way I'm at least as happy with as I had been with TiVo, and (on the bright side) I'm almost certainly using far less power now the old lump is mothballed.
Comments

Lately I've been crying more than I used to. Also I now have a regret. I never used to have one of those... most people seem to collect them frantically, but honestly up until quite recently I'd managed very well without.

Joe's worried about his pet insurance... well actually he's worried about how a fragment of a hoped-for future from our shared past has become embedded in the present in a way which means someone has to do something about it... but the policy number is simpler. You see a year ago, for their birthday, I bought his cats health insurance. Daft isn't it? Not the insurance: cats get sick and these two mean the world to him, so insuring their health makes perfect sense... but being reminded of the shape our future used to be, by a direct debit* that seems absurd to me.

More absurd is how much I like it. It's made me cry, sure. It's also reminded me of a certainty that broke somewhere between July and October last year. It's reminded me of a future I knew would be beautiful, and permanent... and the memory of that "knowledge"** is precious even when that "future" is broken. Possibly in the way that a fragment of a shattered ornament might be precious. Possibly in the way a rediscovered letter might be precious.

I keep thinking I shouldn't put this sort of thought out here. Everyone can see them here... assuming anyone's looking... but above and beyond everything else it does, this blog serves as a reminder for me of how I felt at points in my past... and that makes this belong here. Challenging when I've also brought work into the site but there it is.

So I'm back to trying to wrap my head around what love is. And re-watching a splendid movie a handy phrase pops up. Love is an acquired taste? There's a certain sense in that to me. Love is captivating and compelling all at once on the (rare) occasion when it shows up. But it also needs us to stick with it until we get the taste... like olives.

I'll fix the insurance policy. Next year I won't have this external reminder of that hoped-for future... Wherever next year turns out to be, I'm not sure if that will be a good thing or not. But as I said, cats can get sick. They mean the world to him.. Gotta sort the policy so it stays useful. That much I can make sense of.

* turns out there isn't one, or at least not one attached to an account I still hold.

**even if (as it seem) it wasn't right.
Comments