seems "cryptic" is in vogue

The thing about being a human being is that one's inherent falibility results in the need for so much self development that there's barely any time for the serious business of living... assuming one is doing it right.

By the way, for anyone who was worried: I'm fine, and for anyone who's been wonderful lately (which is many of you) thanks!
Comments (4)

Anyone who's been to visit lately will probably have noticed what a state our garden has gotten into. What with the alternately wet and bright summer we've had so far and with me being quite busy it had become pretty overgrown. Anyway lately it's been getting on my nerves so tonight when I got home from work with nothing to do for a couple of hours, it was all sunny and lovely so I decided to tackle it head on. Mum & Dad probably remember a similar approach to me cleaning my bedroom as a child - I'd spend weeks and weeks letting it get totally out of control, and then eventually blitz it back into shape much the way I did with the garden just now... only with a little less digging. 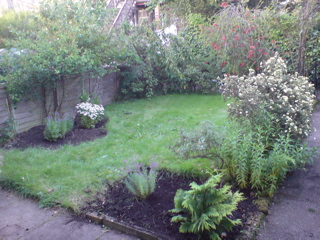 Not a great picture because it's getting late and the sun's gone off to play elsewhere now but "ooh"s and "ah"s are in order for the tidyness I think. Sadly almost all the bedding plants I bought in the spring have copped it, first from evil cats stomping on them, and then from getting overgrown by weeds and shrubs. Next time I have time spare I shall potter over to Homebase and buy some new ones.

This time I intend to thwart the cats and their evil schemes by dousing the surrounds of the flower beds with citrus smells - I recently learned from Chris that cats hate citrus smells. Invaluable bit of information I think, since I'm really not fond of felines. Hame thinks we* should plant a lemon tree but I'm not sure it would survive - anyone know for sure either way?

*by "we" he means me, which is cool - I love gardening but dislike mowing the lawn and he quite enjoys mowing the lawn but is baffled by the rest of the garden so it's all mine to play with!
Comments (3)

can they play both at once?

This week and last week I've spent Sunday evening at a bar called Boda down on Leith Walk watching my friend Lara's husband Tim be a genius on the fiddle/guitar. It feels like the sort of evening one should be having somewhere like the Forge but I think we'd have got a lot wetter trying to walk there*, besides which it'd have been harder to get home in time to be up for work in the morning...

Anyway it feels like the beginning of a good Sunday ritual, a chilled out space to spend the evening in and something to do on Sunday night to kind of mark the end of the weekend. I like it. I also really like Tim's song about being a drunken Scot but he didn't play that this week... maybe next time.

*as it was we had to drop in on Anita and blag the use of some towels on the way over. Bless her for putting up with me and Hamish dripping on the hall carpet!
Comments (1)