So this weekend we officially added a sibling to my family, Alex and Steve have been together now for about 8 years and over that time it's been feeling steadily more like Steve is part of the family. All the same there's something that just feels right about them making it all official. As my parents put it on the day, he's not Alex's partner or boyfriend anymore, he's her husband, their son-in-law and my brother-in-law. They're all just labels, but the sense of belonging and inclusion that those labels suggest is fitting.

Come to think of it, "fitting" describes the whole wedding. That and hot. Al and Steve decided ages ago that a summer wedding in the Cotswolds would be a good idea... I'll let them off because it was ages ago - if it had been a recent decision I think we'd all have been looking for them to get their heads examined: formal wear and temperatures upwards of 30°C do not mix! And while this place was a spectacular location, it really wasn't equipped to shelter us from the heat all that well...

Somehow in spite of the stupidly hot weather, and both being in what must have been far and away the least comfortable outfits Al & Steve managed not only not to die from heat exhaustion but also to look absolutely stunning, see: 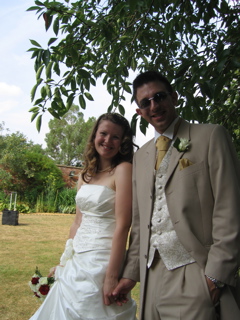 There are heaps more photos and a video somewhere but I think that one shot kind of sums up the day. I might stick a handful more up in the pictures section later on though because there are some really great ones... just depends how busy I get with moving (more on that another time)

So now we are 5, me and my siblings I mean, it's great this getting extra brothers and sisters business, makes me very happy.
Comments

Imaginary Spouse: "Hello dear, how was your day at the office?"
Patrick: "Well, for the first time since I took this job I can genuinely say it was great!"
I.S:"That's wonderful! so you're finally starting to feel comfortable in the job? did they find you any of the kind of work they talked about at the interview? are you feeling like part of the team now? has the crushingly dull data analysis become a joy?"
P:"nope"
I.S: [confused] "oh... well then in what way was it great?"
P:"well the great part came at half past four when my boss took me to one side and told me I don't have to come back on Monday, but that I'll still get paid until the middle of August"

Yup. The whole Marketing Analyst thing hasn't been working out too well... in fact it's been making me pretty miserable. None of the work I was hired to do has shown up, and the part of the job that was supposed to account for about 15% of my time, and be an exciting and valuable learning experience, turned out to demand almost all my time, and be both mind numbingly tedious and really really hard.

So, after exactly five weeks of me beating my head against a brick wall, being mostly very unhappy and not really very useful, the company are terminating my contract early. I get a month's notice which I don't have to work (effectively a paid month off to look for something else) and I get to walk away from this having learned something, even if it isn't what I was expecting to learn.

Essentially what I've learned is that I should stick to more creative roles in future because that's what I'm good at and what I enjoy. I'm still figuring out what exactly that means in terms of what comes next, but I'll keep you posted.

I'm actually posting this on Saturday afternoon not Friday at all, but the whole "honey I'm home" thing doesn't work if the date says Saturday. What I actually did after work on Friday was go and hang out on the grass beside the Parliament in the sunshine with the gang, until the sun had gone down and it got cooler when we all went back to Liz's to drink a bit too much sloe gin and laugh together
Comments

Where was I? oh yeah, my mate Phil is buggering off to London to do a crash course in accountancy so he can get paid better for being a whiz at that sort of thing (which he already is). This sucks, but the other day as part of his preparations for leaving he mailed a bunch of us to ask if anyone knew of a good cheap laptop he could take with him when he goes as Fred* is a bit big to travel with.

Phil's a fellow C21st Mac-head**, but not really much of a geek (unlike, say, me) so I mailed him back and asked if something around £300 would be in the right ball park, this turned out to be a couple of hundred less than he was thinking so we set to and found him a secondhand PowerBook on eBay, a 2000 vintage "Pismo" G3 to be precise.

I know what you're thinking: a six year old laptop's going to be an utter dog right? Wrong. I just went over to instal the extra RAM he bought for it (which including the machine itself brings the total to under £300) and it's a sweet little machine. I've often read people raving about the last G3 PowerBook as the best laptop Apple ever made (high praise if you ask me) but I've never seen one myself before. Now I can see why they've such a reputation, at six years and change this thing's still a strikingly well designed and very capable little computer, it runs the exact same operating system and most of the programs that any brand new Mac you bought today does, and it even looked like its battery might still hold a charge measured in hours (fingers crossed on that, it hadn't fully charged when I came home).

So I'm all vicariously geeked out with Pip's new 'puter, and happy that he has something to keep him in touch with us all while he's awa' south in the badlands.

* see! it's not just me that does that: Fred is Phil's angle-poise style iMac
** as opposed to a preCartesian OS X Mac-head, they're a different animal altogether
Comments (5)

anyone who hasn't played GTA San Andreas won't get this but I'm finally past the Wrong Side of the Tracks mission and so very happy about that, that I could cry.

...either I am very sad, or the good people at Rockstar Games are geniuses. I suspect it's a bit of both
Comments (2)

OK folks, a confession: I've been holding back a little the last ten days or so* but things are looking good so I'll risk posting about it: I seem to have sold my house! It's not all signed and sealed yet so there are still things that could go wrong, but all the surveys are done and accepted, we've agreed a (pretty good) price, and a (quite close) moving date, so I think all that's left is to get signatures on papers, and find myself somewhere else to live.

Good news then, and a HUGE thank you to all of you for being so good about not asking me how it's been going - from watching friends and family go through this house sale process I'm very conscious how smooth a ride I've had so far, and still it's been an exhausting time (and we haven't even got to the box carrying bit yet!) not having to endlessly reiterate where things are up to has been a massive help so thanks for biting your collective tongues!

What's next then? well in the short term a rented flat somewhere in the middle of Edinburgh, preliminary perusals of ESPC's rental pages suggest I should be able to afford something I'll like, and fit inside for less than a pair of limbs, even though this process is inconveniently depositing me on the rental market at the beginning of the Festival (when the city rental market goes a bit loopy) I might just even find somewhere that most of my stuff can fit inside too. Then once the dust settles and I can see what capital I have left over (there will be some, I'm just not sure how much yet) I'll have a think about what I want to do with it and when.

Meanwhile I just had a wonderful long-weekend away in Doncaster visiting with friends and family. I saw and was slobbered on by my ever-growing nephew, hung out all too briefly with my brother and sister-in-law (who are happily visiting me along with the aforementioned drool-monster before I move) caught up with some very dear old friends I'd not had a proper evening with in far too long, stayed up into the small hours with some other old friends with whom I have a history of seeing in the dawn, and spent some good long stretches of time with each of my wonderful parents who I love and don't see nearly enough of.

All in all things are going well - here's hoping they continue to eh?

*unless I've seen you in person most likely, in which case I already blurted out most of this as far as whatever stage it had reached then
Comments