I just had an interesting bit of role reversal: My neighbours came and banged on my door angrily in the middle of the afternoon*. It seems that someone finally ran out of patience with the noise and reported them to Environmental Health, who duly sent the Police round last night. I can't imagine who that might have been, but I suspect they might have done so a lot sooner if they'd known who to contact before now. Seeing as how nextdoor don't seem to give a damn when any of us ask them nicely if we can please get some sleep at 2am, and the nice people at Environmental Health are there to deal with exactly that kind of infantile anti-social rubbish.

Anyway, true to form, instead of taking the hint that their behaviour is out of order and needs to change, the children who inhabit next door were angry that someone had called the Police. I told them that it seemed about time someone had, but that otherwise I didn't see how it was my problem. Then I listened to a few more minutes' worth of angrily agressive and indignant tripe before smiling, wishing them a happy new year and closing the door.

As I understand it, if the nice people from Environmental Health haven't got their message across (and it seems they might not have) then they can (and will) simply take away the noise-making equipment.

To all my fellow taxpaying friends who've ever commented that they didn't feel they got anything for their money, can I just say a really big "thank you" for helping to fund the best new year present ever.

* It's been the other way round, and the middle of the night most weekends since they moved in.
Comments 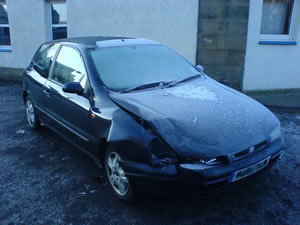 The short version of the story is that coming home from a spectacularly lovely family Christmas in Burghwallis, I foolishly took my usual route home over the Pennines on the A66. As I drove west the weather worsened until I was puttering along very slowly in a minor blizzard. I crested a hill into a stretch of road that hadn't been gritted, to find a number of cars (10 or so I think) strewn over the road at various angles. Turns out a Mondeo had collided with a jeep sending the jeep into the back of a police car (!) and then four more cars had crashed further up the slope trying to avoid the first accident. As I crested the hill two more cars had collided attempting to avoid the second accident. I tried to stop and couldn't, sliding downhill into the back of one car before being hit side on by another which also couldn't stop. Not fun.

Amazingly nobody seemed to have been hurt in all this car-carnage, at least two other cars (as well as my own) were rendered undrivable and had to be towed away. Two hours later as the truck carrying me and Bags left the scene traffic in both directions had ground to a halt, several more minor shunts had happened (some from stopped cars slipping down the hill into other stopped cars!) and the Police were closing the road to all through traffic with snow barriers.

Not a happy end to an otherwise wonderful family Christmas, but I'm all in one piece and it could have been much much worse. Fingers crossed that poor old Bags isn't a total write-off.
Comments

I broke my car :(
Comments

go away: I'm far too busy swimming and doing a job I love and driving insane distances to and from work/home, I don't have time to write all that down for you. shoo.

Why did I think living in the middle of nowhere was a good idea? <looks at room> Oh, yeah. that. well yes my house is deeply lovely* but really two and a half hours a day is too much to lose to travel. There's just so much else to be done! It's making me very sleepy trying to live a full life, work a real job, and still commute. "Commute" is on its way to becoming a four letter word.

What are the compensations? well there's the house, which I love. Then there's the views. I know I've done this to death already in earlier posts, but really the views on my drive are amazing. Yesterday Justin and I drove through two stunning and staggeringly different ones: in the morning we flitted over a monochrome landscape of ice and frost lit by a sky on fire, then at night we skimmed under banks of fog in between which loomed a gigantic red crescent moon. I'll miss that when I move back to civilisation the city. That and the space.

What's this post about? no idea I just felt it was time for one... I'm busy, life is good, beautiful things are happening and I don't have the time to sit and write them down for you... that wouldn't matter so much if "you" weren't also me a year from now. ah well.

*new photos are on their way, promise
Comments