Just back from a weekend down south* catching up with folk and generally chilling out... OK "chilling out" might not be entirely accurate: I spent most of the weekend helping my folks convert the top most bedroom in their house from an essentially unused space into a new master bedroom (they'd already done most of the hard work, I just helped out building flat-pack furniture.)

Somehow the whole clan (me, my two siblings and their respective partners) seem to have settled into the same visiting pattern and without any conspiracy this weekend saw all five of us converge on the ancestral home. I love that the world is small enough for that to work out like it does - in spite of the inevitable smattering of sibling friction (sorry 'bout that Al) it's always great to see everyone.

Sunday afternoon I spent running about catching up with some old friends including Carol who I'd not seen in ages and whose kids Lauren and Katie are easily twice the size they were when I last saw them - Lauren drew me a picture look: 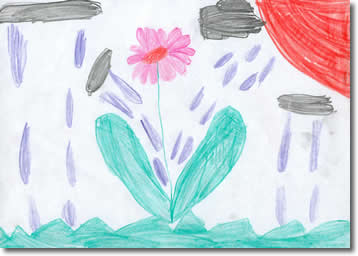 ...I suppose most people would stick it to their fridge but I'm not most people. At Carol's I also met the infamous "missus" aka Andrew - the man who's making an honest woman of one of my oldest and best friends this summer. For the record C'rol I wholeheartedly approve - he's lovely.

Going back to Doncaster always has a kind of restorative effect on me which is strange given how much travelling it necessitates and how busy the weekends always are. Dad once suggested it's because there's a restorative quality to feeling that you belong. I think he's absolutely right, and I'm lucky that I do quite a lot of belonging.

*It's only just stopped feeling strange to me to refer to the North of England as "down south" even though 'home' has been a good way north of there for almost a decade now.
Comments

back from the wilds!

sorry it's been a tad quiet round here of late folks: I've been away on Projects again. This year (for my last one) we had the ideal combination of a really great group of kids, and unbelievably good weather! ... oh yeah and a kick ass music festival half way through.

I'm not going to do a day by day run down of the fortnight like I did last year - for one thing I'm kinda busy - but I will say that I'm really going to miss that aspect of working here... 's a shame you can't keep a job for only two weeks of the year.

As in previous years I've come back from all that fresh air and excercise wondering how I manage to spend so much of the other eleven months of the year indoors sitting on my arse, so anyone who's at all up for geting out there into the hills over the next few weeks need only mention it in passing and I'll be there! Hopefully this time I'll keep the momentum up and make a year-long habit of it.
Comments

After my friends went to see Hitchhiker last week Hamish blogged about how it wasn't the same, meaning that the film didn't really grab him the way the book had when he first encountered it (the book being his first brush with Adams' multifaceted and gloriously inconstant story)

Leaving aside the particular merits of the film for now (except to say that I personally loved it) when I came out of the cinema this evening having seen the Guide for the first time a week later than everyone else, (but thanks to Liz, with just the same sense of occasion and giddy excitement!) its not-the-same-ness was one of the things I'd found most exciting and engaging about it.

Change is something I can relate to right now.

On Friday last week I handed in my resignation at work. I'll work at my current job for another two months because that's the length of time my boss and I agreed suits us both best, but after that I'll leave... and right now I have no idea what happens next. Changes are afoot, some are scarey and as-yet-unkown but change is what it's all about after all.

Change is part of what makes life worth living: growth, development, discovery... it's all about the next interepretation of "today" being different than the last one was. Hopefully you keep the best elements, build on earlier versions, develop themes... but change is a vital part of life in every sense. Not that it's not also important for there to be things which stay the same, but those solid elements should be the kind which support and encourage growth and development (I'm lucky in having a lot of such support in my life) so that their very stability facilitates change...

I've much more to say on this, and about a lot of other things but I'm tired and really must sleep now.
Comments